Cable used for data networking comes in several categories, each rated for different speeds. Rule of thumb: higher number = better. Here is a brief discussion of cable categories, how to terminate the ends, and our conventions.

When choosing which category of cable to use, it is important to realize that the labor costs to pull and terminate them will be the greatest part of the expense, so it makes sense to use cable which will be able to provide for your future needs.

We use a color  conventions for both cables and jacks to aid indeitication:

Category 5 cable, commonly known as Cat 5, is an unshielded twisted pair type cable designed for high signal integrity. The actual standard defines specific electrical properties of the wire, but it is most commonly known as being rated for its Ethernet capability of 100 Mbit/s. Its specific standard designation is EIA/TIA-568. Cat 5 cable typically has three twists per inch of each twisted pair of 24 gauge copper wires within the cable. The twisting of the cable reduces electrical interference and crosstalk. Another important characteristic is that the wires are insulated with a plastic (FEP) that has low dispersion, that is, the dielectric constant of the plastic does not depend greatly on frequency. Special attention also has to be paid to minimizing impedance mismatches at connection points.

It is often used in structured cabling for computer networks such as Fast Ethernet, although it is often used to carry many other signals such as basic voice services, token ring, and ATM (at up to 155 Mbit/s, over short distances).

The other well known flavour of this type of cable is the 10 Mbit/s Category 3 cable. Less well known is the 20 Mbit/s Cat 4. Cat 4 offered only a small advance in speed over Cat 3, and was generally ignored in favour of Cat 5. Cat 1 and Cat 2 are 1 Mbit/s systems for voice and low-speed data.

Patch leads created from Cat 5 are often terminated with RJ-45 electrical connectors. Normal Cat 5 cables are wired "straight through" and connect a computer to a hub or switch. In other words, pin 1 is connected to pin 1, pin 2 to pin 2, etc. The RJ-45 pinout for a Cat 5 cable can either be TIA-568A or TIA-568B. TIA-568A is used by some phone systems and Token Ring. Most everything else, such as the Ethernet standards 10BASE-T and 100BASE-TX, use TIA-568B.

In Ethernet, "crossover" Cat 5 cables are cables in which pairs two and three are reversed. (Pairs one and four are not reversed for 100BASE-T4 but are reversed for 1000BASE-T.) These are most often used to connect two PC's NICs directly (with no intervening hub). They can also be used to connect two hubs or switches together. However most hubs and switches either have an uplink port, a button to change a port to uplink or one or more ports with autosense (most modern switches now have autosense on every port). These features eliminate the need for crossover cables when connecting them. See the Crossover cable and TIA-568B for pinout diagrams.

Cat 5e cable is an enhanced version of Cat 5 for use with 1000BASE-T (gigabit) networks, or for long-distance 100 Base-T links (350 m, compared with 100 m for Cat 5). It must meet the EIA/TIA 568A-5 specification. Virtually all cables sold as Cat 5 are actually Cat 5e. The markings on the cable itself reveal the exact type.

Cat 6 cable is defined by the ANSI TIA/EIA 568B-2.1. It is suitable for 1000 Base-T Ethernet up to 100 m. A cable standard for Gigabit Ethernet and other interconnect that is backward compatible with Category 5 cable, Cat-5e and Cat-3. Cat-6 features more stringent specifications for crosstalk and system noise. The cable standard is suitable for 10BASE-T / 100BASE-TX and 1000BASE-T (Gigabit Ethernet) connections.
The cable contains four twisted copper wire pairs, just like earlier copper cable standards, although each twisted pair is made up of slightly larger 23 gauge copper wire as apposed to Cat 5's 24 gauge wire. When used as a patch cable, Cat-6 is normally terminated in RJ-45 electrical connectors. If components of the various cable standards are intermixed, the performance of the signal path will be limited to that of the lowest category. The distance without losing data is 220m.

Cat 7 cable, with four individually-shielded pairs (ScTP) inside an overall shield, has been proposed but is not in common use. It is designed for transmission frequencies up to 600MHz, which should enable it to carry 10-Gigabit Ethernet (10GBaseT), but requires a redesigned RJ-45 connector (called a GG45) to achieve this speed. Also in development are standards such as Tera from Siemon. Tera, which does not maintain compatibility with RJ-45, promises transmission frequencies of up to 1200 MHz. 10GBaseT networks are not yet widely available, and may not be able to compete with fibre optic networks.

We typically use T568B for ethernet: 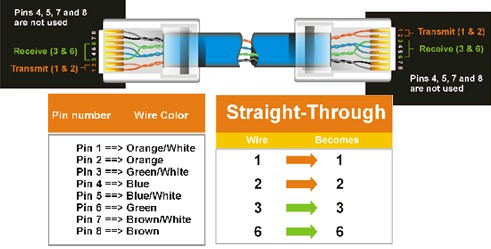 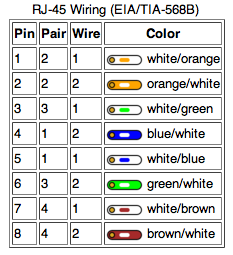 These are not really necessary anymore with the prevalance of auto-switching ports on both switches and devices alike.